When a Career and a Passion Come Together: My Photo Journal

“Its a beautiful thing when a career
and a passion come together.”

When I first arrived at Londolozi I had no idea what to expect. Little did I know that it would very quickly become a place where I would be able to combine a love of the bush with a passion for photography and a fervour for working with people. The Londolozi Studio gives me the opportunity to spend time with guests, hearing about their experiences and getting a glimpse of some of the incredible sights that they are exposed to out in the bush. We look through the highlights of their days and memories and then we immortalize them onto canvases that they take home as a souvenir of their exciting and unforgettable trip. All the ‘oohing’ and ‘aahing’ over these beautiful images usually leads to one of the most commonly asked questions; whether I ever get the chance to get out myself. The answer is absolutely yes! When the stars align and we’re lucky enough to have an afternoon off and a willing ranger, we get to go out on what we call a ‘staff bumble’, the words you really want to hear at the end of a day.

It’s an opportunity for a group of us to adventure out and enjoy the beautiful place that we live and work in, a big part of why we have all chosen to be here. It’s also an opportunity for those of us that have the inclination, to capture some of this magic through a lens, and I take full advantage of every chance I can get to wipe the cobwebs off my camera. There’s something about the bush that speaks to every one of us in one way or another, whether it’s the gentle whisper of sitting quietly in amongst a herd of elephants, or the vociferation of a lion cub being harassed by its sibling. I’ve picked out a couple of photographs that have spoken to me from the last few weeks of adventures and hopefully they’ll say something to you too. 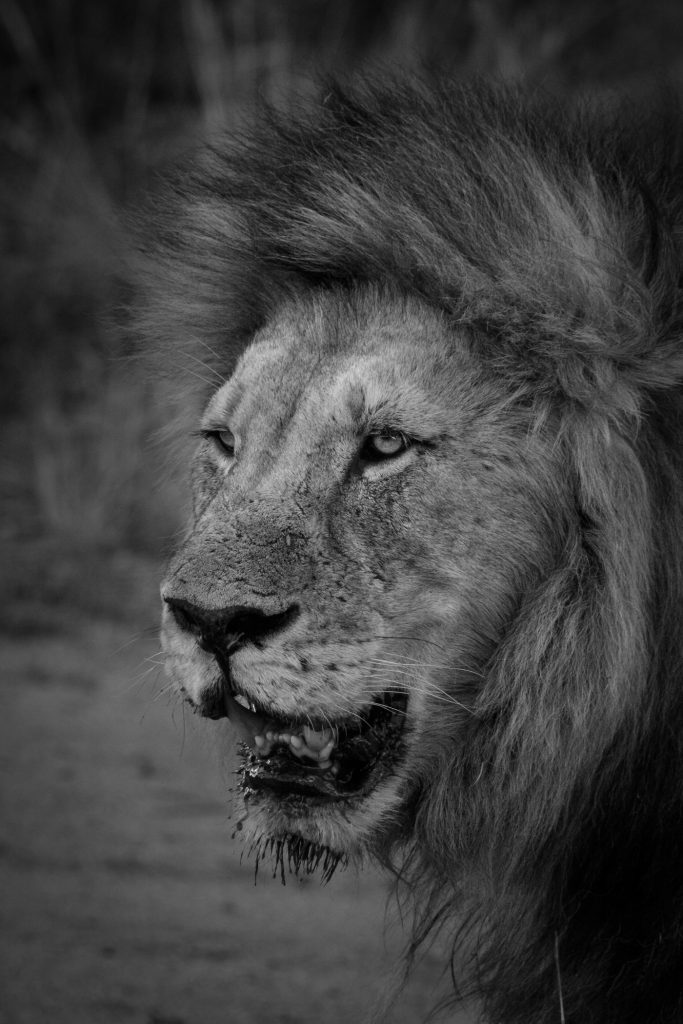 One of the Matimba males looks up after drinking from a muddy pool.
With little water around animals are a bit less discerning about where they get it from. 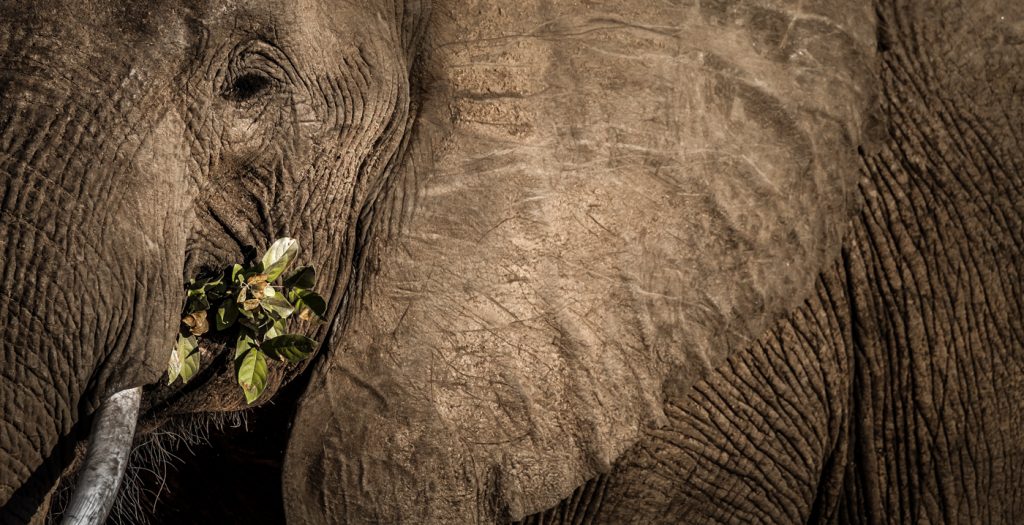 We were lucky enough to spend some time sitting with a herd
of elephant while they quietly went about eating around us. 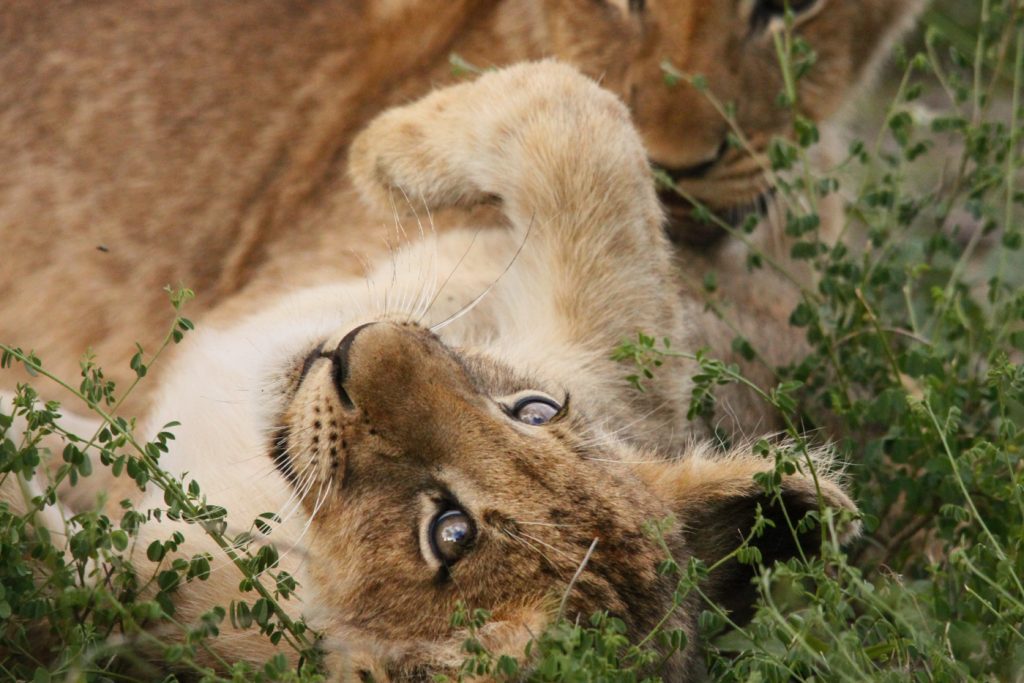 One of the Tsalala cubs rolls in some foliage with its sibling.
It’s hard to believe that in a few short years, this tiny animal will be hunting large game. 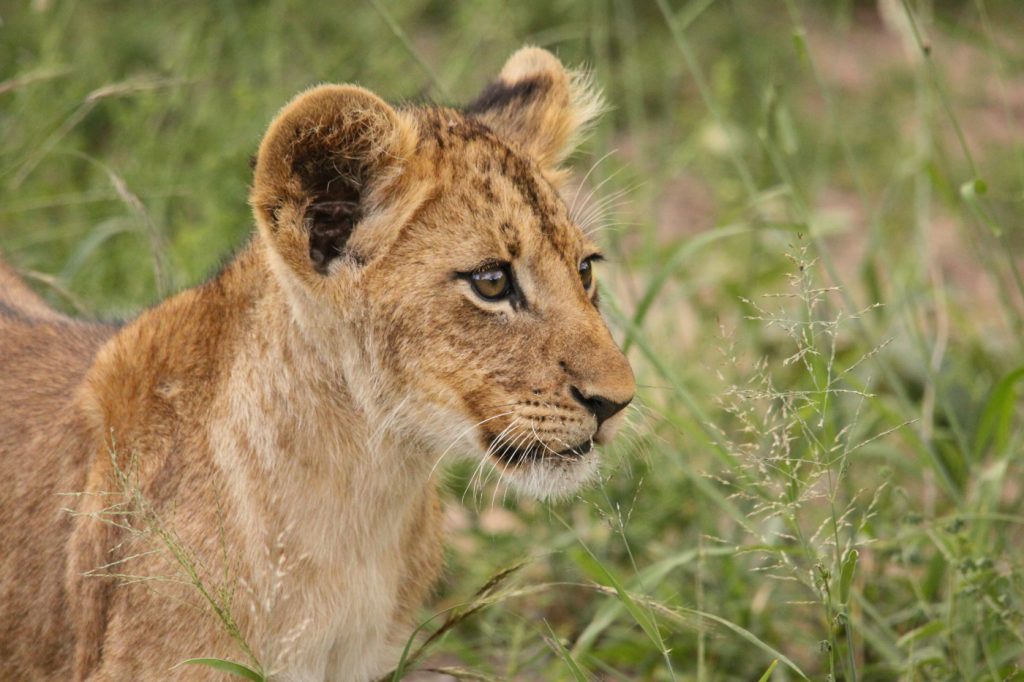 Even the slightest movement or sound nearby catches the eye of these curious and observant youngsters.

Watching any tiny creature is usually an adorable experience… but these two lion cubs were particularly special for me. They spent hours romping with each other and occasionally even trying to take down their significantly larger mother. 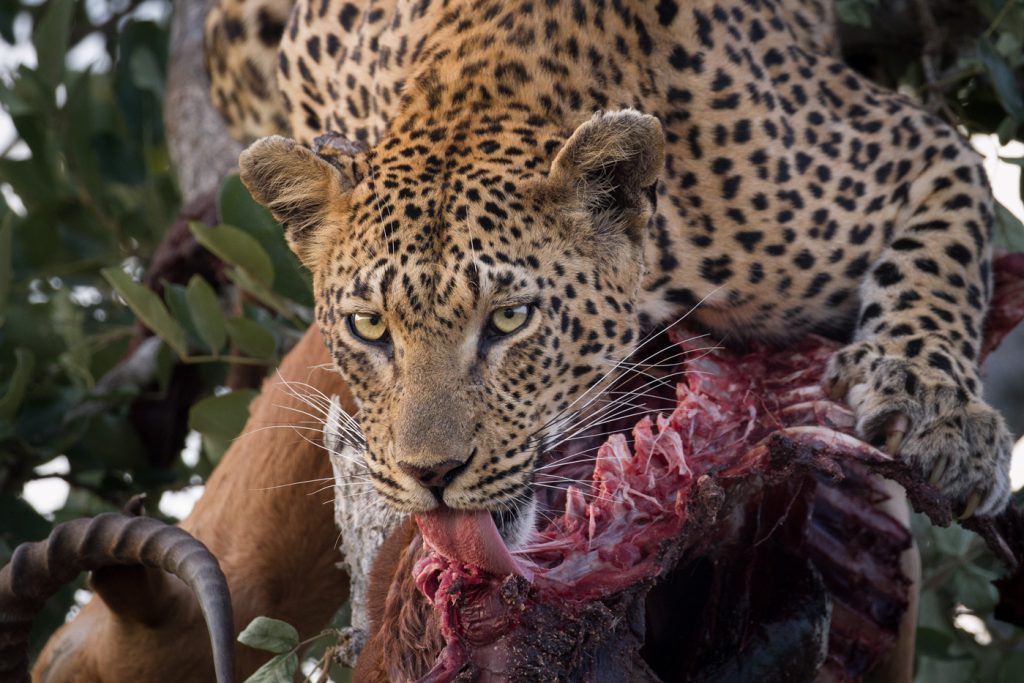 The Mashaba female feeds on an impala ram whilst keeping an eye on a hyena lurking below. 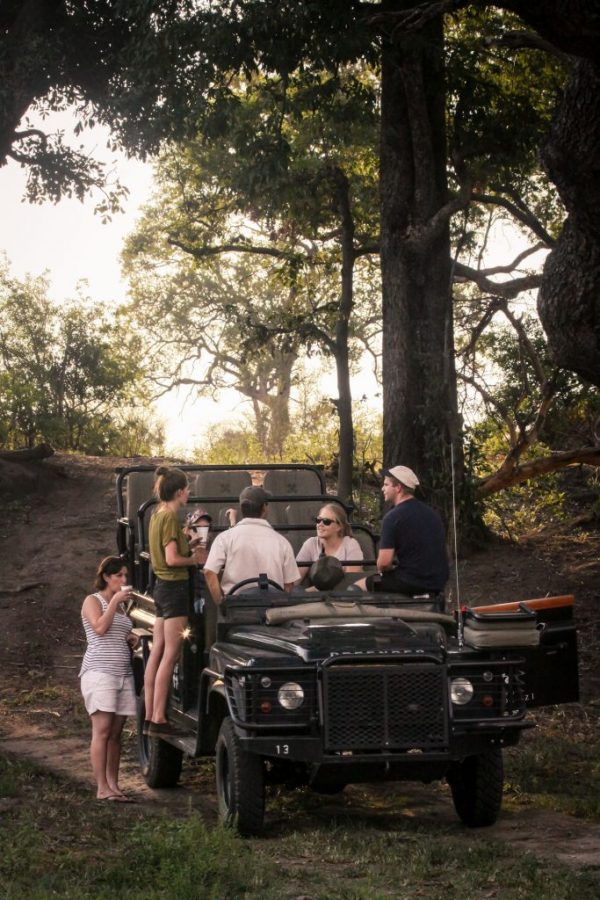 Spending an afternoon out in the bush is sometimes more about the company that you’re in… than what you see. 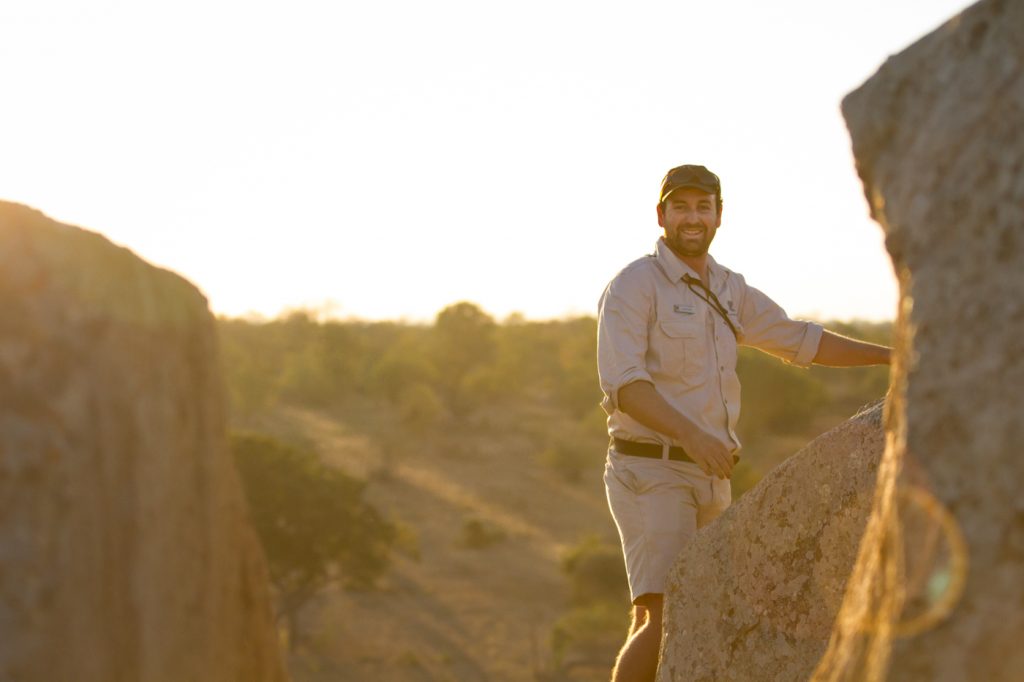 On a recent ‘bumble’, James Souchon, apparently one of Londolozi’s most agile rangers, gave us his best rock dassie impression on top of Ximpalapala Koppie. 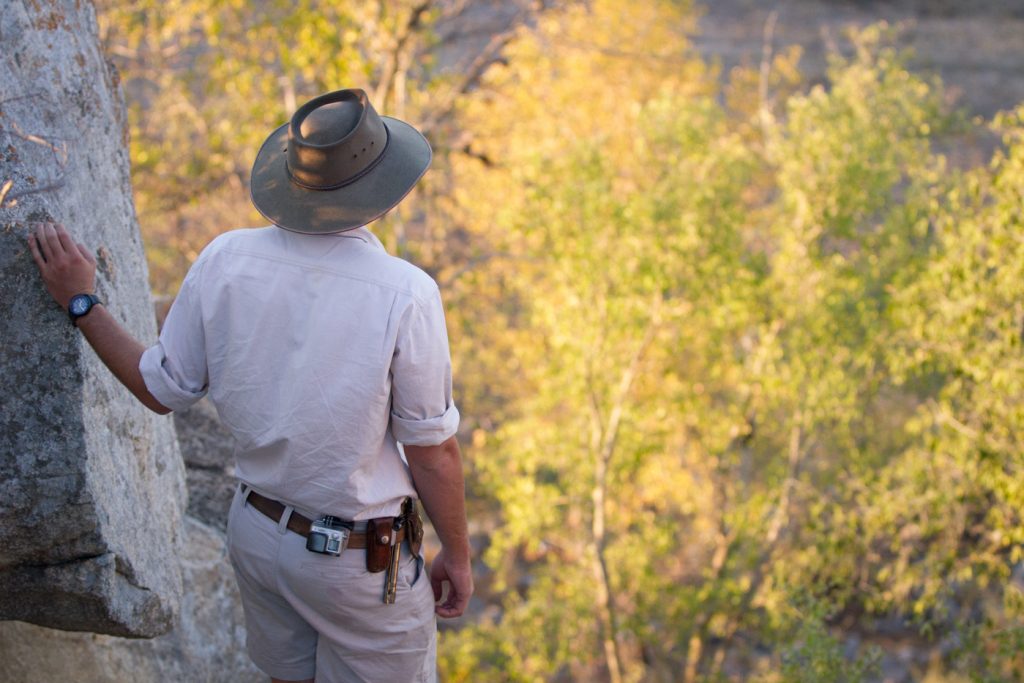 Shaun D’araujo scans the surrounds from the top of a rocky outcrop. Notice his trusty tools of the trade: a knife, rounds and of course, a GoPro. 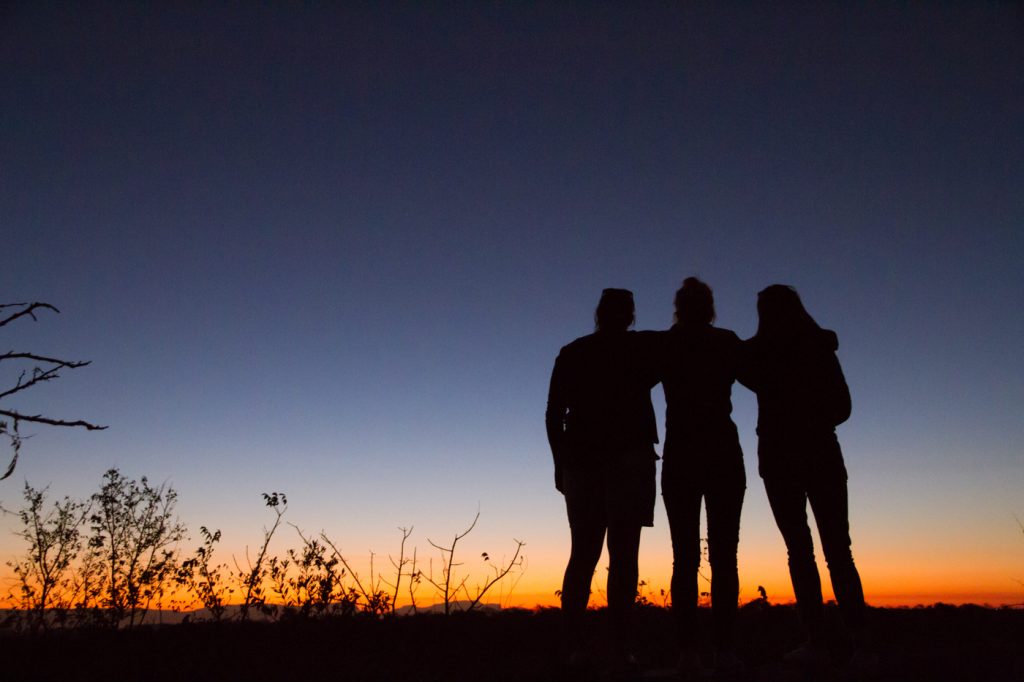 At the end of the day there’s nothing like the magic of a bumble, time spent in the bush with friends, absorbing how lucky we are to be in such a wonderful place doing what we love. You realise you’re one of the lucky ones when your passion and your career are one and the same.

Re-posted with permission from the Londolozi Blog

With grateful thanks to Alice Brewer